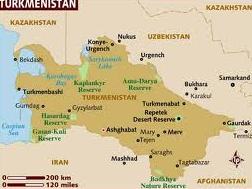 Turkmenistan is the country of deserts and oases, original historical and cultural traditions. The most ancient civilizations of the world were flourishing on its territory. It is one of the richest states with gas and oil reserves.  At the same time the history of independence of the country is several years. Modern Turkmenistan proclaimed its special way of development.

Turkmenistan is located in the southwestern part of Central Asia. It borders on Kazakhstan and Uzbekistan in the North and East, Afghanistan and Iran – in the South. Turkmenistan is washed by the Caspian Sea.
Representatives of many nationalities live in Turkmenistan; however, most of the population is Turkmen. Big groups of the Turkmen live in Uzbekistan, Afghanistan and Iran. There are big communities of the Uzbeks (9 %) and Kazakhs (2%). The significant part of the population is Russian and Russian-speaking peoples (about 7%). Armenians, Azerbaijanis, Tatars, Persians, Lezgins, Uigurs, and also Baluchi and Kurds and etc. live here.

At the beginning of the XX century the Turkmen generally were engaged in farming, first of all, in the nomadic animal breeding and partly in crop-growing agriculture. Over the centuries the nomads were becoming less and less. For the past decade in Turkmenistan the share of employment in industrial sectors (industry and construction) has increased significantly, and number of workers in the agricultural sector reduced. First of all it happened due to immigrants arriving in the republic. In the middle 90s 735 thousand of people (44% of the total employed in the economy) worked in agriculture, 625 thousand of people (about 40%) - in the service sector, and 320 thousand of people (16%) - in industry and construction.
Ashgabad is the capital of the Republic. The city is located in the picturesque valley at the foothills of the Kopet-Dagh, almost at equal distance of all regional centers of the Republic. The city arose in 1881 as a military fortification near the village of the same name.
Three landscapes prevail: desert plains, oases and mountains. The main rivers are the Amu Darya River, the Murghab and the Tejen. The underground lake Kow – Ata (60 meters lower than water) is in the famous Bakharden cave. Its area is 1050 square meters, average depth is 6 meters, and water temperature is +33...+37° С.

Deserts take about 80 % of the territory. The largest desert is the Karakum (“black sands”), it stretches 880 km. from the West to the East. In the South and Southwest there are the Kopet Dag mountains (Rize Mountain – till 2942 meters) and northern foothills of the Paropamiz. The climate is sharply continental, very dry, with considerable daily and annual hesitations of temperatures. Winter is warm, summer is sultry. The highest temperature is in July (+32,2° С). The coldest month is January, but in this month the temperature is above zero in the South and the vegetation of the plants is possible. Precipitation – from 70 to 120 mm. per year, in the mountains - up to 350 mm. Flora is mostly desert.
The ancient culture of Central Asia, including Turkmenistan, is based on religious traditions of Zoroastrianism, Buddhism, Christianity and other cults and worships. From the beginning of the VII — VIII centuries, when the region was conquered by the Arabs, the dominating religion became Islam. The Turkmen, Uzbeks, Tajik, Kazakhs and some other nationalities believing in God, of modern Turkmenistan are Sunni Muslims of Hanafi sense in most. The small part of the local population, origins of Iran are Shia Muslims. Sufism played a big role in the Turkmen society. Sufism (from Arab suf - “coarse wool fabric”, and hair shirt as the attribute of the ascetic) - mystical direction of Muslim faith, which is characterized by a combination of metaphysics with the ascetic practice, doctrine about the gradual approximation of a mystical love for the knowledge of God. Sufism much influenced on literature, folk art and even the political life of local people. In the XX century a big European community in origin was formed here. They are Orthodox Christians, Catholics and Lutherans.

The ruins of Nisa – capital of ancient Parthia (I millennium BC.), are at 18 kilometers to the West of Ashgabad. The remains of city blocks, temples, and palaces preserved here. During excavations of Nisa, archaeologists found a wonderful rhytons (bowls in the form of horn cups) from ivory, sculptures from clay and stones, coins, archival records on clay tablets. These finds are of world significant. The ruins of another ancient city Merv are in the north from Bayram-Ali city. This is the most important historical and architectural monument of Turkmenistan. The oldest part is Erk-Kala, its settlement dates I millennium BC. In the middle of the I millennium AD. Merv was the capital of the East part of the Sassanid Empire, and then the center of the Arab deputies in Khorasan. The city reached its heyday in the XII century within the State of the Seljuks and Khwarazm Shahs. The remains of the city of Sultan Kala with the mausoleum of Sultan Sanjar in the center are the evidence of it. At that time Merv was the largest center in the East on the production of pressed ceramic art. Finally, in the north of Turkmenistan, where old Urgench was situated, the capital of Khorezm in the XII - XIII centuries, such monuments  as the fortress of Akkala ("White fortress "), the minaret, mausoleum of Fakhreddin Razi (second half of the XII century) were preserved. The mausoleum is a brick building with a dodecahedron steeple dome in the form of cube.
Turkmenistan is a Republic. The president is a head of the government and executive power. Legislative power is implemented by the Parliament - People's Assembly (Khalk Medjlis).