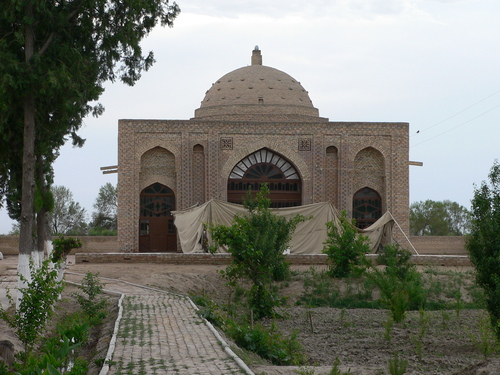 Talkhatan Baba Mosque is located 30km from the old Merv, on the territory of the medieval village Talkhatan. The mosque dates to the XI century; it has a shape of a regular rectangle without any traditional roofs and columns. The decoration of the building is patterned brickwork of light burnt brick, combining with figured inserts, which gives the building proportions ease and richness of ornament. The façade of the mosque is decorated with three arches, and its internal and external walls with uniform ornament. Despite its old age, Talahtan Baba Mosque is well preserved to this day. The mosque is annually visited by hundreds of tourists and pilgrims, as Talkhatan Baba is outstandingmonumentofCentral Asianarchitecture of the end of the XI century.