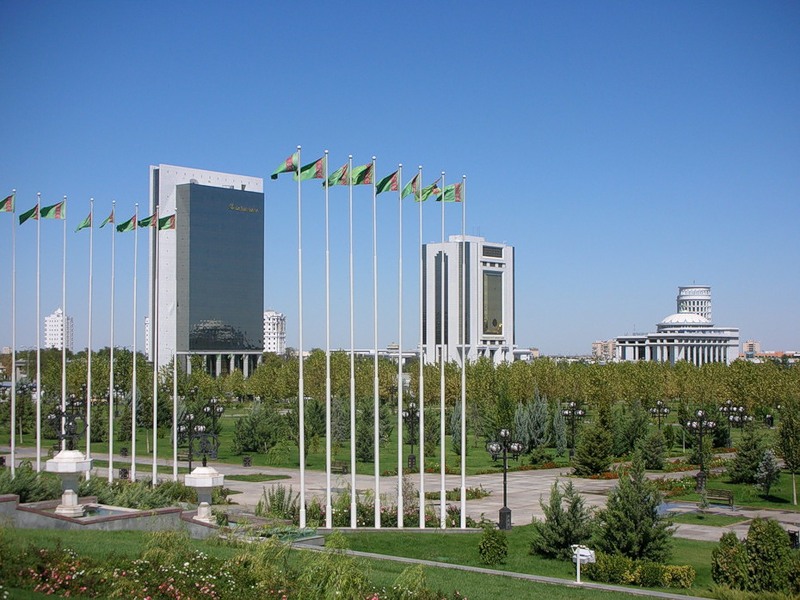 Ashgabat (Ashkhabat) is the capital and the largest city of Turkmenistan, which name can be translated as the "city of love". It is located in the south-west part of the country, in the extensive oasis, which lies at the foothills of Kopet-Dagh, on the very edge of the hot desert. The city was founded at the beginning and in the middle of the XX century around Russian fortress built in 1881 at the crossing of caravan roads. In 1885 the Caspian Railroad was built, which stimulated it to its development. In October 6, 1948, Ashgabat was wiped off from the face of the earth after the earthquake; at least 110 thousand of people died. For five years this city had been closed to visitors. During this time the bodies of victims were taken out of the ruins, and the reconstruction of the city began.  Today Ashgabat is a modern city with straight streets and avenues.
The main sights are: Arch of Neutrality (1998, 75 m. - the highest construction in Turkmenistan), with the gold statue of Turkmenbashi on the top, the Presidential Palace (former building of the Communist Party of Turkmenistan, 1950-1955), the building of Medjlis (former complex of the Council of Ministers, 1954-1956), the complex of Academy of Sciences (1949-1953), the Academic Theater of drama named after Mollanepes (1951-1958), Bairam-Khan monument, Mekan Palace (1970-1974), the building of National Library (1964-1976), the musical school and conservatory (1975-1992), the orthodox church of Aleksandr Nevskiy (XIX century), Ertogrulgazy mosque with 4 minarets and the enormous dome (1997) - the largest mosque in the country, and also Ashkhabat circus (1979-1984).

The large Sunday bazaar “Tolkuchka” (flea market) is famous for its variety of goods and bright Turkmen traditions. Stretching for several kilometers along the desert outskirts of the city, the bazaar is attracting attention, first of all, the possibility to buy traditional Turkmen carpets, which are brought here for sale from across the country. “Russkiy” (roofed) and “Tekinskiy” bazaars are popular places of trade.
The Capital Museum of Carpet is considered the only one in the world. Hundreds of best models of carpets of all times, the oldest of which relates to the XVII century, are represented here. The largest carpet in the world, which area is almost 400 square meters, and weight is more than one ton is also here. The exposure of National Museum of History and Ethnography with a large collection of ancient exhibits, gathered from the entire territory of Turkmenistan, including excavation samples of old Nissa is also interesting. Also of great interest is visiting The Exhibition Hall of Artists Union of Turkmenistan, the private gallery "Mukhammed", "Ensi", "Akbulak" and "Juma Jumadurdi" are of obvious interest.
There are many places of interest around the capital. Scientists affirm that the oases of the foothills were the site of formation of not the only one civilization of antiquity, and the desert sands hide unique historical and cultural monuments. 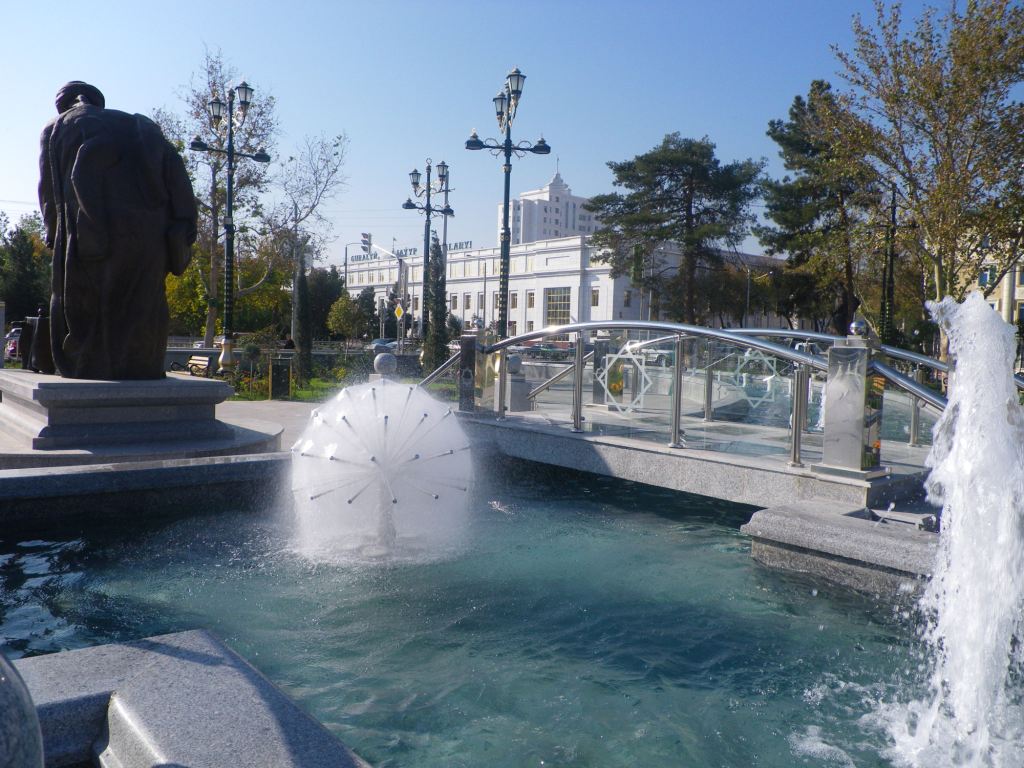 At 12 kilometers to the Southeast of Ashgabat here is the archaeological area Anau-Depe (IV-III thousand years BC.) and the fortress Anau (III century BC. - III century AD.), as well as the ruins of the medieval town of the same name with a mosque. At 18 kilometers to the West of Ashgabat there is a unique monument of history - the ruins of the ancient capital of the Parthian state, today known as Nisa (Konenusay, III century BC. - III century AD.) A great deal of unique objects of the past was discovered on the small territory of the ancient town, including 2700 tablets from clay with inscriptions, ruins of the ancient fortress Mitridatkert (area about 14 hectares), the remains of town districts, churches, palaces, the archive of business documents, artworks and others.
Lying in a green valley, at 30 km. to the South-west of Ashgabat, the hunting residence of the Persian royal family Firyuza, is a popular mountain resort. It is a real salvation from the high temperature of the surrounding plains. A mountain hiking trail "Serdaor Eli" passes through the most picturesque places of Kopetdag. Nearby is the famous cave Bakharden with a huge underground lake Cou-Ata ("Father of Lakes," the area is of about three thousand square meters). The water temperature in the lake is about +36 C all the year-round, and it is saturated with a great deal of salt: hydrogen sulfide, boron, manganese and bromine, etc. Today Cou-Ata is a national nature reserve, as besides the lake, there is a colony of bats In the cave , the biggest colony in the CIS.