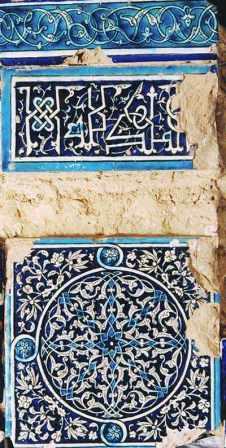 Mausoleum of Nadjmeddin Kubra, without words, is the main sacred place of Kunya Urgench – one of the oldest Turkmen cities, which till the XIII century was the capital of the great empire of the Khorezmshakhs. The memorial complex is located almost in the center of the modern city not far from the historical building Dash mosque, where now there are museum and the mausoleum of Matkerim ishan.
In 2005 it was included to the List of World heritage of UNESCO.
Today the specialists of National administration of Turkmenistan on protection, studying and restoration of historical and cultural monuments, are firstly engaged not only in researching, but the reconstruction of indeed inimitable artwork of old masters of Khorezm.
It so happened that sixty years ago a column with a tombstone was shattered with the collapsed dome Gurhan. For many years the surviving remnants of the former glory were lying in the open air, they decayed because of the rain and snow. Only in the early 80's the failed dome was rebuilt, but it took nearly thirty years to begin works on the restoration of the tomb. The project of Turkmen specialists was supported by the Fund of U.S. ambassador in the framework of the international program "Conservation of Cultural Heritage" and this is the second year of painstaking work to rebuild the remaining parts of the lining of several hundred large and very small fragments.
Following by modern international norms in the field of monuments conservation, the restorers do their work on the strictly scientists base, showing the example of reliable reconstruction of the original.