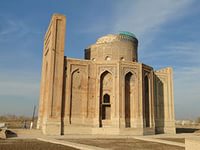 Tyurabek-Khanum Mausoleum was built in Kunya-Urgench in the second half of XIV century. The building is a rotunda topped with drum and blue dome.

For the first time ceramic mosaic was used by architects in the decoration of the mausoleum. Masters, who built this grand building, combined rich decoration and architectural forms. You can see the colored picture on the wall of the building, standing out against a background of polished brick masonry. You will be amazed by the beauty of well preserved mosaic interior. The dominant colors are white and blue, as well as red, black, green and gold colors. Tyurabek-khanum is Mongol princess, the daughter of the ruler Uzbek-khan and Kutlug Timur’s wife. Her name has always been associated with many legends. According one of them, Tyurabek-Khanum promised master Gulgardan, who was hopelessly in love with her, to marry him if he builds a beautiful building for her. Gulgardan constructed mausoleum, which up to now continues to fascinate people at richness of decoration and multicolored patterns. But the princess broke her promise, preferring and marrying the ruler of Khorezm Kutlug Timur. Master didn’t survive lies and threw himself from the top of the mausoleum.

Unfortunately, today we can’t see the building in its original form as the construction was severely damaged. Despite, the tomb of Sufi dynasty and Tyurabek-khanum is a place where every year thousand pilgrims come from different countries.