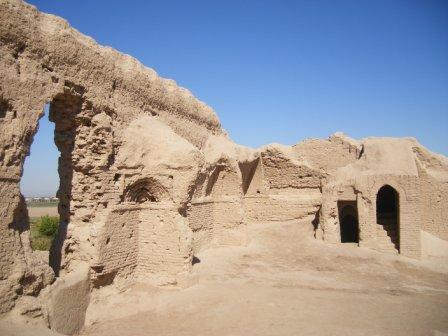 Merv oasis (40 km. to the east from Mary) is one of the most ancient regions of Central Asia, which mastered an irrigation system related to the period of Bronze Age. Therefore it is not surprising that Merv (Margush, Margiana, Mouru or Maru in different sources) grew here as one of the largest city in ancient world. The origin of Merv is covered by mystery. The only one fact is clear - the first written references about its appearance are in Avesta chronicles of approximately VIII-VI c.c. B.C. Omar Khayam, As-Samani, Imamad-din-Isfaxani and other great persons of middle ages lived and created here.
Contemporary ruins include more than five ancient settlements: Erk-Kala, Gyaur-Kala, Sultan-Kala, Abdulla-Khan-Kala and Bayram-Aly-Khan-Kala, surrounded by wall and ruins of other fortification and cult constructions (precise boundaries of city are not known until now). Majority of them are destroyed and only earthen hills remained. But even taking into account this moment Merv continues to remain as one of the most unique monuments of history. During our days it is introduced into the list of UNESCO world heritage as the most well preserved ancient center of the Great Silk Road.
The most interesting monuments of history are: 40 meters high mausoleum of Sultan-Sanjar-Dar-al-Akhir (1140 A.D.), Sultan-Kala, Shazriar-Ark citadel, wall remains of Abdulla-Khan-Kala (XV c.), ruins of fortress and towers of Bayaramali-Khan-Kala, ruins of Kyz-Kala fortress (VI-VII c. AD.), mausoleum al-Khakim-ibn-Amir-al-Djafari and Burayd-ibn-Hussein-al-Islami (XV c.) place of pilgrimage, Muxammad-ibn-Zeyd mausoleum (XII c.), 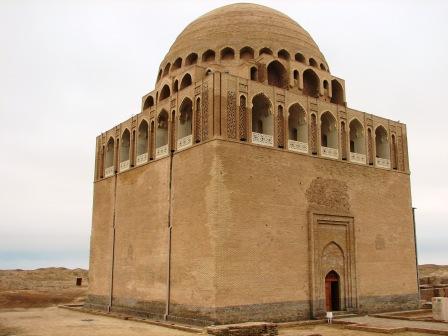 Talkhatan-Baba complex with the mausoleums of Talkhatan-Baba, Imam Kasim, Imam Shafi and Imam Bakr of the epoch of the Seldjuks, Yusuf Khamadani mosque (XIII c., reconstructed in XIX c.), Erk-Kala fortress ruins (VI c.), ruins of Christian temple and Buddhist monastery in Gjaur-Kala (ancient Antioch Margiana), ruins of Beni Makhan mosque (Friday mosque, VII-XII c.c.), high walls of similar fortress construction of Big and Small Kyzyl-Kala, Kyz-Bibi mausoleum and also numerous remains of baths, palaces, ceremonial halls and other constructions.
There are also the mausoleum of Dandankhan and Talkhatan-Baba mosques (XII century, at 30 kilometre's distance from South-east of Merv), keshk (fortified house) Akuyli-Koushuk (IX-XIII centuries), Kharam-Keshk fortress situated at 7 kilometers to the North of Gyaur-Kala (IX-XIII centuries), Durnali fortification situated at 25 kilometers to the North of Gyaur-Kala (I-II centuries), Gebekly fortification situated at 32 kilometers to the north-west of Gjaur-Kala. Today, many archaeological findings which were discovered during excavations of ancient towns are exposed in excellent Historical Museum of Merv.