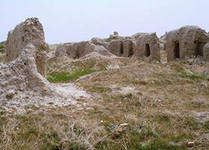 One of the most important cities of Northern Khorasan is a medieval settlement Abiverd. Hafiz-i-Abru said that Abiverd settlement consisted of dozens of villages and several cities. There was a portal- domed mosque in the centre of the settlement, from which only ruins of brick portal were preserved. Judging by the décor, made of bricks and decorated with tiles of blue glaze, one can say about a high artistic level of this unique settlement. The city wall is a rectangular area of 42 hectares.
There also were found ancient coins, ceramics products of IX-XII centuries, as well as a lot of metal handicrafts: various women's jewelries, buckles. According by them, we can say that there were shops of jewelers and tinkers. During the excavations archeologists found huge wells and reservoirs, indicating a highly-developed irrigation of Abiverd.
The first investigation was took place in 1928 under the lidership A.A. Semenov, who first made a plan of the city, citadel and remains of the city wall. In addition to Semenov’s scientific works, there are also archeological materials collected by the members of the expedition from different parts of Abiverd.